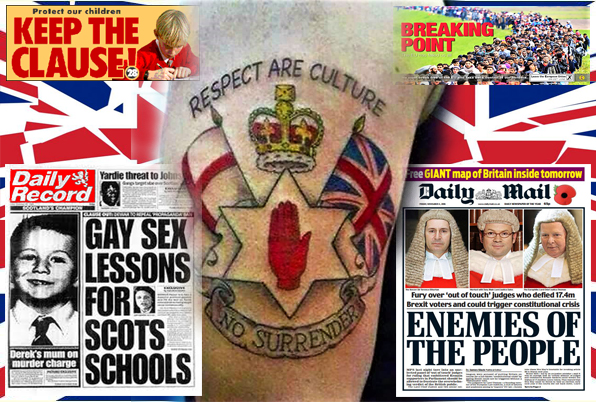 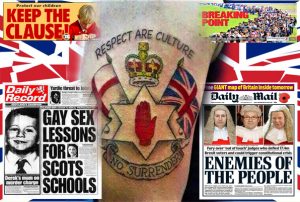 It was one of a lorry-load of primetime pro-Brexiteer jocks on LBC that gasped at me, “Are you calling the majority of people who voted Brexit, stupid?” Well… Your doctor would if you ignored his qualified advice, so perhaps this presenter should check his own rhetoric before questioning my claim that the majority who voted for Brexit were indeed… stupid! Lumpen, bovine, cretinus fuds threatening stability, peace and prosperity in Britain’s – to use the polite words of Lord Adonis – “nationalist spasm”.

But this is democracy cry the Brexiteers!

Indeed, whilst democracy means giving everyone ‘their say’ it is normally tempered with parliamentary committees and qualified advisors who guide parliamentary members to make the best choices for the seething masses who don’t have the time to scrutinise the process beyond their own emotive kneejerk reactions.

Referendums challenge you to take a side. But the side you choose can be fuelled by wealthy demagogues inflated by the toxic gas of half-truths and speculation before being ignited by a sensational media or a chorus of half-wits endorsed by sympathetic algorithms on social media.

Brexit is civil war; not democracy. You just need to win! You don’t want to hear the best educated and informed voices from the opposition (not that you would until after everyone had voted). But facts don’t change opinions. That’s a fact. Backed up by studies.

It is not democracy to ask the public to take a side on something they know nothing about and then refusing them a vote some years down the line when we do know. When we’re snaking round long queues to fill-in a visa to go on holiday. When we can no longer get free health care in Europe. Or work or study in Europe without a permit. When Little England is so completely beyond f**cked that the light from the planet F**cked would take a million light years to reach Earth!

I feel like I’ve just voted in a political party for life!

Brexit is doubly painful when it depends on a £1billion bung to the DUP, a Party representing the U.K.’s mad aunt in the attic, Northern Ireland. A Party that operates against the will of most of its own electorate on many issues including Brexit.

There was no clear winner about leaving Europe even before Theresa May’s Tories lost their majority. Unlike Scotland where there was always a clear majority in Scotland opposed to Brexit and that mandate to call a second independence referendum still stands. A referendum for independence is not needed. Parties that support it are already in a majority. But I digress…

DON’T EVER CALL A REFERENDUM!

If you do, be prepared for money to be squandered on billboards, if not vilifying minorities; peddling half-truths. Be prepared to witness minorities getting a kicking in the streets. Get ready to hear intellectual “elites” being denounced and discredited. Read newspapers warning of ‘cliques’ and ‘international conspiracies’. Watch debates slimmed down to sloganeering. Click on stories about big money changing hands and nobody caring beyond a tired gasp over their Shreddies. Hear leading figures threaten tanks on the streets and street violence IF THE PUBLIC DOESN’T GET ITS WAY!

Oh…! And that wasn’t the referendum on Brexit! It was the referendum in Scotland on the repeal of the notorious Clause 28. The law that forbade the “promotion” of homosexuality as a “pretended family relationship”.

The “will of the people” saw ‘Keep the Clause’ become a popular playground catchphrase at the time. There were beatings (one was a young doctor outside a gay pub), a suicide (he was a young 16-year-old schoolboy at a Catholic school), murders (almost a dozen men easily identifiable as homosexual as the fight went nationwide), buildings were smashed or defaced and the fledgling Scottish government was nearly brought down as the tabloids stirred discontent and advertising vans circled the parliament in Edinburgh. It was the reality of a toxic referendum bankrolled by evangelical Christian millionaire Brian Souter in 2000.

In England and Wales, efforts to keep Section 28 on the statute books was, to a large extent, pointless since Section 28 applied not to schools but local authorities whose control many had opted out of under measures introduced by – of all people – former Tory leader Margaret Thatcher. But who cares about facts? Not when Catholic leaders were comparing gays to Nazis, The Record was running daily editorials in support of Clause 28 or the letters pages were filled with disgruntled observers, like the parent who threatened to punch his son’s teacher. The Sun drew an opticians chart for the “blind, deaf and bonkers” parliamentarians to read on its front page while many printed pictures of how to spot homosexuals by measuring phalanges. Like Brexit Britain is now, Scotland was a darker place then.

Just like gays were scapegoated in Scotland for a war against “the siren voices of liberalism”, so too have immigrants become the scapegoats in a drive for nationalism, patriotism and “getting our country back”. The socially conservative are speaking now as they spoke then: with one angry, aggressive voice.

The referendum in Scotland in 2000 only succeeded in dividing opinion. The turnout after the £2million campaign was a measly 32% but Keep the Clause organisers claimed only 13% voted for repeal of Clause 28 against the majority of 86%. Similarly, with Brexit, only around one quarter of eligible voters ever voted for it.

Whilst former Attorney General Dominic Grieve QC MP was passing five death threats to the police after participating in a rebellion that led to Mrs May’s first defeat over Brexit, Dominic Lawson was writing in the Daily Mail, a tabloid as virulent in its support of the Jesus-in-jackboots brigade against the repeal of Clause 28 as it is for the socially conservative Brexiteers: “Condemning people for being ‘populist and nationalist’ can only have the result that they respond: yes, and what’s your problem?”

The main protagonist during the Keep the Clause debacle was the editor of the Daily Record, Martin Clarke. His daily editorials were little more than a megaphone for the siren voices of the homophobes. Clarke found his new home in the arms of the tyrannical Daily Mail and went on to edit its online content.

We are now living in changing times when London’s mayor can be heckled by a mob with cries of ‘We want Brexit; we want Trump’.  But the threats of tanks on the streets never materialised after the Scottish government took back control and repealed Section 28, or even after it went on to let gays marry. To be frank, for all their hot air, the government’s armchair critics would have struggled to walk to the corner shop for a packet of fags.

So, let’s not be deterred from getting our country back from the stupid.

Garry Otton  (Author of Religious Fascism: The Repeal of Section 28)