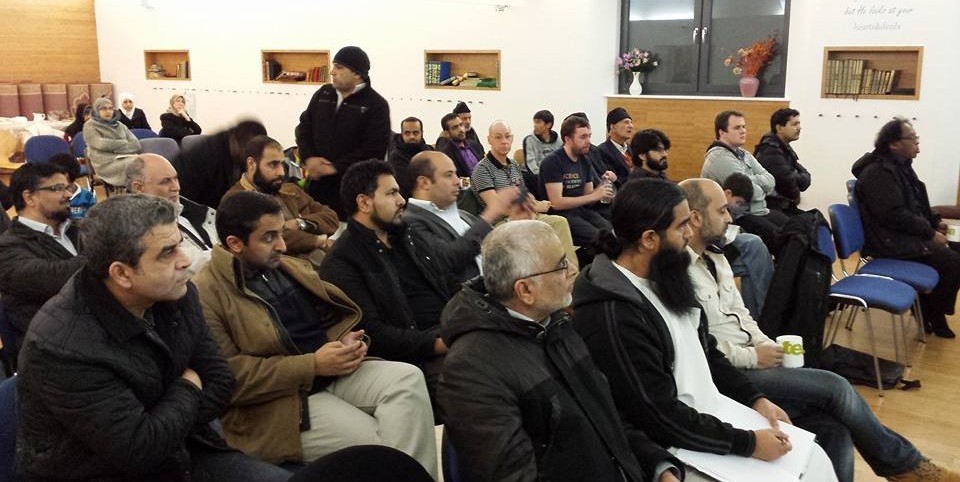 The men were filing into the hall for a talk after Friday prayers at Al-Furqan mosque in Glasgow’s affluent west end. A small bunch of women, separated from the men in front by a long mat, were still uttering prayers at the back. It would be the only thing I would hear from them all evening. It didn’t used to be like this. Less than a year ago I remember the women gathered for a talk, albeit huddled together, joining the men in the more central rows asking questions of the speaker. Now they sat with their children and a separate table for tea and coffee. They even had a separate plate of biscuits. I helped myself to a Bourbon biscuit from the man’s table and poured myself a tea from one of the men’s cups.

This talk was part of Interfaith Week, itself part of a £9million spree funded by taxpayers to encourage people of faith to talk to each other.

When I was last at Al-Furqan mosque there was a talk with a minister from a local Episcopalian church, and pouring myself a mug of tea from an otherwise more bisexual selection of refreshments, I overheard the minister commending the grant funding to the Imam. The Imam’s left now, leaving the mosque advertising for “an experienced Imam who is well versed in Islamic sciences (sic).”

In tonight’s talk, science would be getting a make-over by Dr Alastair Noble, an advocate of a new breed of Biblical creationism called Intelligent Design (ID). He was enthusiastically welcomed by the host, Haq. Noble was the director of the Glasgow-based organisation C4ID, registered in Guernsey as a charity. He also worked for Christian Action, Research and Education (CARE), a Christian charity campaigning for more religious education in schools. In a CARE video, Noble makes it clear, “Only six percent of British young people ever cross the door of a church these days, so it’s not hard to see… where Christians should be exerting influence: Schools.”

Children of various ages were in the audience. One young scamp, taking advantage of an Access All Areas privilege, being fortunate enough to be born with a penis, made a grab for the mike before being ushered away by an amused adult.

Noble would have to remind the gathered on a number of occasions that tonight’s talk wasn’t about religion. Rebutting Leonard Krishtalka, a palaeontologist who called Intelligent Design “nothing more than creationism in a cheap tuxedo,” Noble explained, “Most people who are aware of Intelligent Design (ID) assume, wrongly, that it is a variant of creationism or a form of religious fundamentalism.” He might’ve overlooked the selection of publications and tracts he’d brought along with him to display at the back. These included his friend, Wee Free Rev David Robertson’s book, The Dawkins Letters. (‘Christianity on acid’, I’d say if you were asking me for a one-line review for the back cover.’) Later that evening, after someone spotted the Christian material on display, I saw his book getting penned-in by a circle of Muslim books and leaflets. The interfaith magic was clearly wearing off.

In the wake of a series of incidents involving Christian fundamentalists, the education secretary in England issued guidelines halting the teaching of creationism in schools. The Scottish Government, however, has remained intransient and insisted evolution-denial was not infiltrating Scottish schools. They wilfully ignored the Kirktonholme Primary School scandal where, a year earlier in 2013, creationism had been peddled to children for eight years at the invite of head teachers. The Parliamentary Petitions Committee sought some reassurance by asking a selection of educational bodies their reaction to the Scottish Secular Society’s petition for guidance. A letter condemning the petition was prompt from Ken Cunningham CBE, the secretary of the head teachers’ organisation, School Leaders Scotland (SLS). It later transpired that he was also an Elder and secretary of Cartsbridge Evangelical Church where creationist Dr Alastair Noble regularly preached.

Noble had met a representative from the Al-Furqan mosque at a schools conference before Haq promised him a series of lectures to promote ID. Although not altogether welcoming of secular talks, Al-Furqan was a friendly place to visit and did some good work within the community. At the time of my visit they were busy organising a third Bake Sale where proceeds went to Age Scotland.

Dr Noble was getting tetchy. I dismissed Intelligent Design as “nonsense” and “creationism in a lab-coat.” In his booklet ‘ID: An Introduction to Intelligent Design’, Noble insists, “Although ID has philosophical and religious implications, it is not based on any such presupposition”. But as fast as he tried to disentangle ID from Christianity, he was swaddling science up as a religion and christening it ‘scientism’.

“Scientism is constrained in its interpretation of scientific data by its underlying philosophy of naturalism. It is, in effect, a religion….” A perennial chancer, he added: “The Government’s position on scientism is probably in violation of the European Convention of Human Rights (ECHR) which gives parents the right to have their children educated ‘in line with their philosophical and religious beliefs’. In this connection, it’s worth remembering that all Christians, Jews and Muslims are ‘creationist’, in a broad sense, by definition. Scientism challenges the historic Judeo-Christian worldview which has built our society and in which we have, until now, enjoyed freedom of enquiry and expression.”

This is a familiar creationist ploy, deliberately confounding the idea of God as overall creator, with the very different idea of separate creation of different kinds of living things and why the Scottish Secular Society referred specifically to “separate creation” in the Government petition, as opposed to, “the established science of evolution and common descent.”

For someone who has studied Chemistry at Glasgow University, it seems ID is giving Noble a scientific explanation for his fundamental Christian view of Biblical creationism. “…Creationism, in its central assertion that the universe has a Creator, is a perfectly respectable and reasonable position.  Indeed, it is by far the view that has dominated human thought since the beginning of time. It is, to most people who have ever lived, the most credible explanation of why anything is here.” Intelligent Design, he adds, “provides support for a theistic view of the universe”. During his talk, his contempt for Darwin was projected onto the wall behind him: “The Darwinian theory of evolution is no more or less than the great cosmogenic myth of the twentieth century.”

It’s always interesting to expose a Young Earth Creationist, (YEC), so I had to ask Dr Noble a direct question: “How old is the Earth?” I was expecting an obscure conflated answer and I got one. First he insisted he didn’t have a view, then he did, suggesting there were “uncertainties that depend on the assumptions you make” which led to what he described as his “open mind about it” before warning me that, “the scientific consensus is arrogant”. He went on to say: “I was listening to a geologist giving a lecture, and he was showing a piece of rock in which there was a seam of coal. Now, coal can be dated by carbon-14 dating. The rock was supposed to be 300 million years old, but the coal in the rock was dated at 40,000 years. So there’s something not right. If the rock is 300 million and the coal’s 40,000 there’s something not right about that, because both of those numbers can’t be correct and carbon dating only goes back to, I think, about 50,000 years, so the error is not in the date of the coal. There are other methods, but all of them depend on making a judgment about the actual concentration of minerals and so on, and we haven’t got any actual way of knowing.”

This is gobbledegook to me. I’m not a scientist and told him so.  Then, sounding like he’d just crossed the board to take my Queen, added with a smile, “I am a scientist”, although Dr Noble’s vita doesn’t show him as having done any actual science since his PhD in 1970.

Professor Paul Braterman gives short shift to snake-oil salesmen and when informed of this explanation delivered a response some might find a little gritty for an Emeritus Professor: “What Noble says is full of elementary scientific mistakes. The reason carbon dating doesn’t go back beyond 50,000 years is that the amount of Carbon-14 present becomes too low to measure, compared with background noise, so the error bars stretch out backwards to infinity. However, notoriously, very old materials commonly have spurious young carbon-14 dates because of contamination by more recent material, or – in the case of coal – because carbon-14 is being generated inside the coal through the action of other radioactive elements on nitrogen-14 which is always present in coal. So what Noble is saying is scientific nonsense. And he is actually saying that because carbon-14 doesn’t go back beyond 50,000 years, therefore it is the carbon-14 that is accurate, and not the matrix rock. Absolutely topsy-turvy. Incredible!

As for his further claim that we don’t know initial concentrations, this is bollocks. We start the clock from the time of the emplacement of the materials, and, since the 1940s, what are known as isochron methods have been routinely used, in which non-radiogenic material is used as an internal standard to correct for the mobility of materials. Moreover, modern micro-sampling methods extract material from specific areas within individual crystallites, giving further detailed information about the migration of material.”

This takes me way beyond the science O’ Level I never got, but for those with O’ Level science and beyond, you might want to read some more from Professor Braterman here, here and here.

The whole debate had been played out already in Pennsylvania in 2005 during the famous Kitzmiller vs Dover Area School District case which spawned the award-winning documentary, Judgment Day: Intelligent Design on Trial. Noble briefly mentioned the trial. He omitted mentioning though, that after the scientific merits of ID were reviewed in dozens of hours of expert testimony from both sides, Judge John E Jones III ruled firmly against ID. “ID is a religious view, a mere re-labelling of creationism, and not a scientific theory,” he said. Noble insisted to me – quite excitedly by now – that Judge Jones did not dismiss ID as religious and chastised me for having “misunderstood”, adding “ID is not Christianity”. I insisted Judge Jones said it was, after which Noble blasted: “No he didn’t. You are showing your bias as science must always be open. I don’t think you understand Intelligent Design and I will take that personally because I clearly explained it well enough!”

An agitated Dr Noble then turned to a gentleman in the second row who asked how he could prove the influence of Intelligent Design. Noble begun by explaining, “Scientists draw conclusions by working in a laboratory, they work with data, work with observations… It is in a sense a ‘deductive’ science. You work from what you’ve got, propose a theory, you’ve submitted your text and you then either falsify your theory, or you establish your theory. That’s how science is done.” A little surprised, the gentleman begged, “But who falsifies their theory?” At that point, Haq suddenly interrupted him to tell to him he was being disrespectful and asked: “Would you mind leaving, sir…?”

He left rather sharply.

Amongst many other beneficiaries of Scottish Government Interfaith funding of £9million was the religious guests of a slap-up meal in April at Eyre Hall, co-hosted by the Kirk and Catholic Church in 2014, and a group headed by Dr Duncan Morrow – the majority with Christian affiliations – who found that separating children on the basis of their parents’ religion in separate schools didn’t contribute to sectarianism.