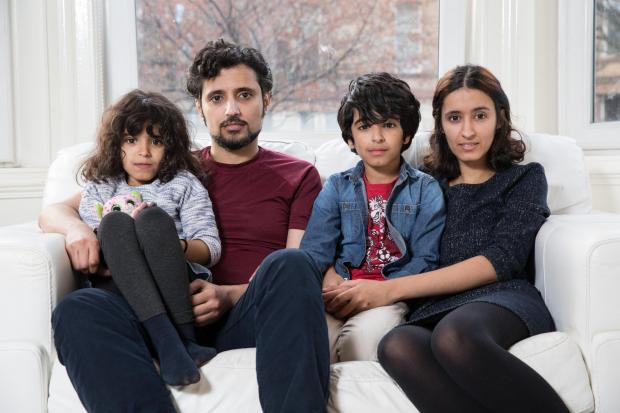 A young couple learn the price of questioning Islam in Saudi Arabia.

Abdullah Alamri was a failure. He refused to demonstrate how well he could practice Islam in public, yet his sisters loved their impudent, stylish, feminist brother they called Amri. He introduced his sisters to the internet and encouraged one of them – sentenced to a life of imprisonment in the home to do housework – to study for her exams at high school. When she passed, Amri felt like he had opened her cage and set her free as he had as a teenager for a small caged bird his family kept in their home. Inspired by his act, Amri attracted doves from all over the neighbourhood; feeding them on the roof of their house. And this is where Amri spent many hours growing as an agnostic freethinker, reading amongst the doves as they flapped their white wings to join him from across the rooftops of Alkharj to be fed. This is where he would often eat, even during Ramadan, watching a flock of neighbours in the street below, their white thobes flapping as they flew to the mosque to demonstrate their piety with more prayer and fasting.

So it was to be, albeit covered in a long, black Abayah and veil, a young Haifa was brought in by the family to help persuade Amri to conform to Saudi customs and adopt a more pious attitude to Islam. But the plan seriously backfired when, much to both their family’s chagrin, Amri converted his new wife into an unbeliever: an ‘infidel’. As Haifa explained: “As someone with a strict Islamic belief I tried all I could to convert Amri. He would patiently tell me, ‘if I have something right, use logic and you will convince me without force’. I didn’t know what logic really meant. I wouldn’t watch TV with him and he left me to practice my faith as long as I did not impose it on him. He likes to read books about philosophy. He’s a sensitive and intelligent man. And was a great fan of Raif Badawi’s liberal forum, a blog that had Raif sentenced to ten years and 1,000 lashes. He also enjoyed Sahat Faris’s political forum, Alsaha. These blogs were frequently banned in Saudi Arabia. It is when I started to listen to Amri and discuss matters privately without anyone listening to us that I slowly started to question things like the prophet’s morality and how, as a leader, Mohammad manipulated people to achieve his goals. I began to change and enjoy the discussions. Wow! It felt amazing to talk and question. I remember the day Amri showed me how Jews pray, believing as they do that God will take action in response to prayer, and that the more they ask God to help them, the more God would love them. This was all becoming such nonsense to me. I felt deceived. I stopped praying, abandoned the Quran and became a ‘liberal’.”

However passionate and strong Haifa was in words, she is fragile in build. Her slender hands tremble as she fights back tears, reliving the circumstances which forced them to leave Saudi Arabia. “Amri is a passionate mathematician teaching the subject for more than eight years”, she shares enthusiastically. “He would spend a great deal of his time preparing for his class. He is innovative and creative. When he talks about math, I see how numbers are alive in his world. He tells me, ‘life is math’. To those who he is teaching, he argues constructively, persuasively and offers much encouragement. He uses new technology to make math enjoyable for high school students, yet he struggled with fellow staff and headteachers in applying these innovative methods which were producing good results in exams. He really came unstuck after sharing his opinions in the staff room on the Arab Spring. He suggested it might bring about positive change in Saudi Arabia. That, along with his lack of Islamic piety and refusal to demonstrate it in public got him the sack. This was a tragedy for us. Amri had been working on a scholarship for almost a year at the Educational Ministry in the hope of completing a post-graduate course overseas. Amri’s career was now over. We had some savings in the bank, but no income.”

Their love and commitment to each other was strong and Haifa was determined to help her husband. Amri encouraged her to learn English, studying in secret in the family home. He even set a target of 10 weeks to learn the language sufficiently well to apply to get into an English university. Haifa qualified and they fled to Egypt in order to apply for a British visa, fearing they would face obstructions from the Saudi authorities. It came at the time of the Egyptian military coup, so they fled to Morocco where they stayed until they finally arrived in London in August 2013.

Discarding her headscarf left Haifa feeling liberated and she loved to wear dresses but found the most difficult thing was learning to look into a man’s eyes. She remembers: “Eye contact was a real issue! I couldn’t explain this to the men I spoke to so I confided in Amri after two weeks into my course at the university. He asked, ‘please, Haifa, could you just do this for me? Try it out for two months and then tell me what you think’. I did try it. Learning so many new things at university was a big distraction from my fears. Soon I was communicating comfortably with people from different backgrounds in a new culture. It was a truly wonderful experience.”

While they lived in Preston, Amri became Chairman of the Saudi Students Club but opted-out of helping Saudi students with their religious activities. The Saudi authorities had credited £9,328 into Amri’s personal account. Fearing accusations of money laundering, he begged them to give him a written statement that this money was, as he had been advised, to finance the conversion of a church into a Wahhabi mosque. They refused.

The family moved to Glasgow after Haifa had enrolled in a medical course at Glasgow University with a growing ambition to research regenerative medicine where patients are treated with their own body cells. Amri stayed at home to look after their children, Mohammed, 10 and daughter Gadah, 7. That could be challenging as Haifa remembers how the school assumed, because of his name, Mohammed should eat Halal meat. “I just want him to choose for himself what he eats and why!” Haifa gushed, indignantly.

While in Glasgow, Haifa reflected on a call Amri received from the Saudi embassy: “The tone of officials was sharp. Amri was invited to speak to them at the Saudi embassy in London. They tried to scare him. They blackmailed him and threatened to sue him. When he got there, he told them: ‘I wouldn’t have come here if I knew I was going to be treated like this.’

“I received a call from an embassy official while I was at university. They blamed me for being a bad influence. I asked why he was calling me and not Amri and asked him to call again once I’d got home, but he never did.”

Shortly after, the Saudi government withdrew Haifa’s scholarship and froze their personal account so they could no longer access money. The family promptly filed for asylum and Glasgow University asked Haifa to leave.

Haifa refused to be defeated. Since she and her husband were unable to work whilst applying for asylum, she set up a GoFundMe page to help pay for food and rent. Haifa was frustrated that the human rights organisations she tried to contact showed little interest in matters of no concern to the UK, but after contacting Secular Scotland on Facebook, the group issued a press release and Scottish newspapers began sharing their plight. It was the time of Secular Scotland’s fourth birthday and AGM. Within weeks, Haifa was voted the new Chair of the group and regularly posts stories challenging religious hegemony, privilege and crime on its Facebook page. After accepting the position Haifa said: “I agreed because it’s time for me to learn more and educate myself on secularism. Learning is always a rewarding experience for me.”

It remains to be seen if Saudi officials share this family’s enthusiasm for freethinking, or whether the British government are likely to put human rights before its overseas interests. In the meantime, Haifa remains resolute and dreams of going back to university but still faces a torrent of abuse on social media from religious fanatics.