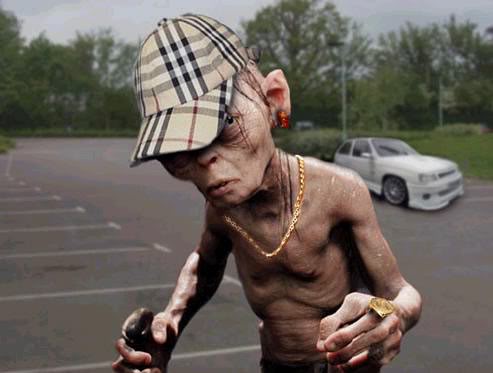 I’m assured it’s a jaundiced view, but mention the SNP to me and I think of befuddled old codgers drowning in Jacobs Creek and a tidal wave of unrepentant filth and permissiveness. I see former WeeFree leader Gordon Wilson wheeled out at a conference fringe spouting how equal marriage is a step toward state fascism or constituency party chairman Ken Gunn on a BBC Radio Scotland phone-in ranting on about how “non-believers are damned to Hell”. But as Smeagol might say: the SNP holds my Precious. They stoles it from us. And we must get it back, my love, and take it for usss.

Forgive me if the penny hasn’t dropped… I’m on about ‘Scotland going independent’. (And if I’m saying it like my mum describes whipping off your bra on the Cote Sauvage: ‘going topless’, it’s because it’s still all a bit foreign to me).

Scotland has something going for it. In the seventeenth century we boasted five universities to England’s two. By the mid-eighteenth century, the Scots were the most literate citizens in Europe. David Hume, Francis Hutcheson, Alexander Campbell, Adam Smith, Dugald Stewart, Thomas Reid, Robert Burns, Adam Ferguson, John Playfair, Joseph Black and James Hutton; all testimony to the Scottish Enlightenment that left its mark across the world. Today, we’re just opportunists trying to hoist our flag behind Andy Murray after his win at Wimbledon, or scroungers doling out free prescriptions and free care for the elderly. And, as I was reminded this summer by a housewife emerging through open patio doors from the cool pastel shades of her lounge/diner, crossing her clipped English lawn to share a bottle of Tesco’s Finest Premier cru and a fresh strawberry al fresco: “It’s all money you don’t have!” And thinking beyond news of swingeing NHS budget cuts delivered to her the previous evening by Julia Somerville: “…While we have to pay for it!”

I think working together as equal neighbours will be great. I hope the English tap into their sense of fair play and embrace the idea. If you love something; let it go. If it comes back: it’s yours. If it doesn’t: that tartan tin of shortbread still is, along with the bottle of Bells and the See You Jimmy hat you picked up in Largs. And if you really want us, we’ll still come to Blackpool, get drunk and vomit on your streets during September Weekend.

The English will soon get used to independence.

In the meantime, we’ll enjoy ours by making decisions like Nordic countries, making laws from Holyrood and obliterating the archaic, semi-theocracy, the House of Lords in one fell swoop. We’ll end the imposition of the Tories, that ruling elite of religious and socially conservative, swaggering Hooray Henrys we never voted for. No longer will our State Broadcaster throw a switch at Broadcasting House at half-six so we can ‘see what’s happening in your region’, as the United Kingdom of Great Britain and Northern Ireland split up like excited children so Jackie Bird can report an egg-and-spoon race in Newton Mearns wearing a rictus grin. We’ll go our own way. England, Wales and its mad aunt in the attic can make their own news.

Independence is an opportunity to protect our rights in a constitution.

As Scottish Secular Society (SSS) constitutionalist and research director of the Constitutional Commission, Elliot Bulmer writes in The Herald: “The electoral system for the House of Commons is unrepresentative, the composition of the House of Lords is indefensible, the powers of the Crown are excessive, secretive and unaccountable, rights are fragile, and privileges rife.”

Mr Bulmer adds: “There is a direct connection between allowing rulers to make up the rules as they go along and the failure of the UK state to serve the common good. The banking crisis, the expenses scandal, phone hacking, illegal surveillance, persistent unemployment and wage cuts, rising inequality, corporate lobbying, and the destruction of public infrastructure and services – all point to a state that has fallen into the hands of an unchecked oligarchy, bound by its own self-interest.”

Credit where credit’s due; for all the SNP’s faults, they have committed Scotland to a constitution after independence. Worth a colon, hyphen and a closed bracket of anyone’s time, is that! 🙂

And what of the head of the Church of England, Elizabeth the Second, by the Grace of God, of Great Britain, Ireland and the British Dominions beyond the Seas Queen, Defender of the Faith? She will go on showing off her colourful twin-sets and eye-catching millinery in a titular role just as she does throughout all of her commonwealth countries. Only we won’t have to pay for it. (Unless the Parly want her to open a new Tesco in Aberfeldy or something).

The UK’s highest legislature of the land is the House of Lords with its Lords Spiritual: 26 unelected bishops from the Church of England. They have the powers to tamper, stymie and throw out legislation altogether. These bishops do not include members of the Church of Scotland which is Presbyterian and has no bishops, or bishops from the Catholic Church whose members are also denied access to the throne, or clerics from Wales or Northern Ireland as their churches are not established. The Monarch is the Supreme Governor and Defender of the Faith, and that faith is the established Church of England.

The UK is a theocracy.

The future make-up of a UK could see Islam emerging as a major religion, and as in any theocracy, there is a high risk it could crumble into sectarian division and war. By voting for an independent Scotland we will become a democracy, and by all accounts a secular one protecting freedom for, and from, religion.

In modern times no nation, once its electorate have been asked if they want to become an independent democracy, have ever voted ‘No’.

Saying YES to independence is not voting to put the SNP in power: It is empowering us to ensure there is a party to vote for in Scotland that will separate church and state. No more will Westminster deny us the right to legislate on stuff like abortion because we can’t be trusted or Holyrood pass the buck to Westminster on things like equalising the age of consent and gay marriage because we haven’t got the balls to deal with it ourselves.

None of us mind a bit of Christian, but – as the saying goes – I couldn’t eat a whole one. And there’s something of a surplus, particularly with organisations like the right wing Christian Action Research and Education (CARE) feeding their interns into the government and media, aided and abetted by MPs like Tim Farron, party president of the so-called Liberal Democrats, generously paying them more than the minimum wage. Mr Farron, who lists the God Delusion as his least favourite book absents himself from equality legislation because he’s a Christian. Yes, very liberal is that.

For Labour; round of applause, please, for Catholic Jim Murphy who squandered taxpayers’ money entertaining Herr Ratzinger, (aka Pope Benedict), to this country on a ‘State visit’ while papers were being lodged against him in the International Criminal Court in The Hague for crimes against humanity.

Or Ruth Davidson, a Christian lesbian who joined the Tories to promote free enterprise and personal freedoms from a party underpinned by door-knocking Christians baying for the criminalisation of sex work, ‘family values’ and more internet censorship.

The SNP are no different. Bankrolled by a zealous Christian bus driver from the Church of Nazarene, Brian Souter, boss of Stagecoach and 49% owner of Virgin Trains nearly brought down our fledgling Parliament over his nasty ‘Keep the Clause’ campaign in 2000. He wanted a law preventing ‘homosexual propaganda’. Unlike Vladimir Putin and Patriarch Kirill of the Russian Orthodox Church, he didn’t get one.

The SNP also have MP, John ‘the Baptist’ Mason on an Equal Opportunities Committee. Before the same sex marriage debate had even stepped on the dance floor, Mason was joining hands with Bill Walker (who likes marriage so much he’s done it four times before facing allegations of wife-beating from three of them). They were joined by the pious, MSP Richard Lyle who objected to health workers handing out condoms to men who were having sex with men in Strathclyde Park.

And it was that old slapper, Cardinal Keith O’Brien, who read out requests to vote for an SNP candidate in all Catholic churches close to Glenrothes back in 2008. Peter Grant lost, disappearing into the firmament faster than a Cardinal in a bed of young seminarians. Scotland was changing, no longer in thrall to the crucifix and the crozier; you’d think the SNP might’ve seen it coming, but no… Next up was Opus Dei member, Scottish Catholic Media Office spokesman and former editor of ‘Newsnicht’, David Kerr standing for the SNP in a 2009 by-election in Glasgow’s North East. He lost too… Badly. This performance was only topped by Labour who had Ms Ruth Kelly, another member of the sinister Opus Dei sect; a poor excuse for a Minister for Equality serving under Tony Blair. Anytime a vote was needed on ‘equality’ issues like gay rights, Ms Kelly could be seen rushing out the door, absenting herself from the chamber! Right on, Labour!

Mr Salmond surrounds himself with old stalwarts like minister, Fergus Ewing talking with Brian Souter’s charity the Souter Charitable Trust (STC) – whose declared aim is “the advancement of religion” – about sending electric currents to the brains of drug addicts to cure them and another Catholic minister, Roseanne Cunningham who objects to gay people adopting kids. Alex Salmond is a Christian (when are our leaders not?) who promises “unswerving support” for more “faith” schools, including Islamic schools. While the mealy-mouthed might talk about plurality, someone needs to tell them that division doesn’t help integration whatever way you spin it.

And just wait until you have to get an essential life-saving vaccine like the one against cervical cancer into schools. Alex Salmond had to strike a deal between the Catholic Church and health and education officials to remove all references to condoms offering protection against sexually transmitted diseases from leaflets offering safer sex advice; in all schools, not just the sectarian ones. That was the deal.

Putting all that aside. Independence is not about political parties. Independence is when we put the brave back in Scotland and believe in ourselves enough to make changes for the better. Let’s stop dragging our knuckles in the gutters; listening to pish from the ‘No’ camp that we’re not worthy; haven’t got the baws or the money.

Vote YES for democracy and ditch the theocracy!

And remember. This isn’t about the SNP, it’s about our precious. Independence.

Garry Otton is the author of Sexual Fascism and founder of the Scottish Secular Society.