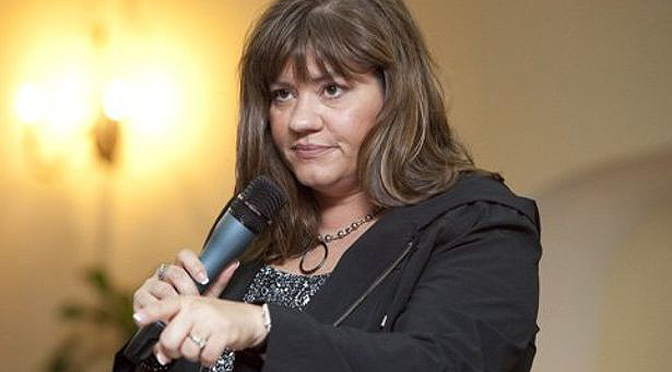 Hiring an abstinence-only preacher from the States under the auspices of a panel of bishops with limited sexual experiences. Garry Otton witnesses a bad sex education lesson in a Catholic school.

Abstinence-only sex education has proven to be a catastrophic failure in America, despite the millions ploughed into it by former President George W Bush. Nonetheless, uniformed school-kids are filing in off coaches from all over the Catholic diocese of Paisley to fill an assembly hall at St Andrew’s Academy to watch mouthy, abstinence-only, religious zealot, Pam Stenzel poison their minds with fear and anxiety over sex. With money drying up after Obama was elected, Stenzel’s company is still cashing in. Her company, Enlighten Communications, earned $268,799 in 2011.

Pam Stenzel is a cross between a Baptist preacher and Roseanne Barr. She began counselling young women at crisis pregnancy centres, frequently run by pro-life organizations not known for handing out the truth and was now here to frighten the kids into abstinence under the watchful eye of their RE teachers, Father Tom Boyle and Michael McGrath from the Scottish Catholic Education Service.

Stenzel says it clearly enough: “Condoms are NOT safe”. And she says it right after she warns HIV kills you. I put that to Michael McGrath who was sitting behind me with two others. They quickly closed ranks. “You’re misrepresenting us… She did not say that… She said condoms protect against HIV”. I was astonished they were calling me a liar. Tracy Clark-Flory writes on Salon.com: “Here’s a direct quote from Stenzel on that topic: “Condoms aren’t safe. Never have been, never will be.”

Stenzel rattles off sexually transmitted infections like an armed Christian right-wing gun nut taking out the whole school: “HPV-genital warts-syphilis-gonorrhoea-herpes-chlamydia-vulvodynia-Hep B-Hepatitis-HIV-and HPV”, she bawls out over the kid’s heads without taking a breath. “30 per cent of STI’s are incurable,” she rants.

Before predictably wheeling in heterosexual marriage (God created) and anti-choice propaganda, the all-American mom squeezes in a joke and gets a few laughs before turning on her audience to warn that if they had sex outside a virginal marriage, “you will pay”, repeating: “No one has ever had more than one partner and not paid.” The audience are being reeled in, but her delivery is so patronising and smug she had to apologise for sounding like she disliked the male gender. She recounted how she once asked a puzzled boy where his vulva was. Pause. Then she yelled: “YOU DON’T HAVE ONE!” Everyone laughed with her. I was now understanding a comment I overheard her make to one of the teachers before she went on stage: “The kids are great! The people I have trouble with are adults.”

Behind Pam Stenzel is a banner that reads: “We are not some casual product of evolution. Each of us is the result of a thought of God,” although that might not have been the thought going through the man who raped her 15-year-old mother before she was given up for adoption. “My life isn’t worth any less than any of yours just because of the way I was conceived, and I did not deserve the death penalty because of the crime of my father”.

Getting a student of controversial Jerry Falwell’s Liberty University to talk to children was no accident. She was invited by Fertility Care Scotland, a charity that promotes the ‘Billings Ovulation Method of Natural Fertility Regulation’ which uses “knowledge about your own fertility to achieve or avoid a pregnancy,” offering a “method of natural family planning” they describe as “a reliable alternative to contraception.” Many west coast of Scotland folk, including, no doubt, many of the kids assembled here, ‘getting off at Haymarket,’ the Edinburgh station just before the main one at Edinburgh Waverley. I think you get the picture.

Fertility Care Scotland had a clinic at Glasgow’s former Southern General Hospital where the two Catholic nurses won their fight not to be involved in abortions.

I was told by teacher Sam McFaddon that parents had all given their express permission to be here. One young boy I spoke to begged to differ. With a roll of his eyes he told me in a quiet voice that he’d been sent by his teacher. Now he was spending the evening in his St.Ninian’s blazer listening to a pro-abstinence zealot throwing cold water on his secret thoughts of beach babes in bikinis, screaming: “If the sun doesn’t touch it – no son must touch it!”

Death and disease crops up more than condoms in Stenzel’s tirade. So do so-called ‘Purity rings’ the ‘princesses, daughters of the king of kings’ can wear until they have found a male virgin. As for the girls, she warns them: “You contract Chlamydia one time in your life, cure it or not, there is about a 25 per cent chance that you will be sterile for the rest of your life.”

Stenzel has received sharp criticism from Sexuality Information and Education Council of the United States (SIECUS), who have challenged some of the myths she peddles, like telling children sex would put them at risk of getting warts “for the rest of your life” and confusing their young minds by adding “you can’t know if you have viral infections.” SIECUS advises: “The majority of HPV infections cause neither genital warts nor cervical cancer but, instead, resolve themselves spontaneously without medical intervention. Even HPV infections that cause warts can resolve without treatment.” On infertility, Stenzel says: “Girls, please hear this, this is primarily going to affect the girls: infertility, the ability to have children, has risen over 500 per cent in 10 years.” SIECUS attacked this too in their report: “Although the media has focused a great deal of attention on infertility in recent years, much of this is tied to the fact that women are delaying pregnancy well into their 30s and 40s, in fact, research suggests that infertility rates have remained unchanged.”

Pam Stenzel is not interested in telling the truth. In a speech to a fundamentalist conference called “Reclaiming America for Christ” in 2003, she rejected the idea that abstinence education be judged by its effectiveness. “People of God,” she exploded, “can I beg you, to commit yourself to truth, not what works! I don’t care if it works, because at the end of the day I’m not answering to you, I’m answering to God!”

The Catholic cleric behind me and his cohorts were clearly in agreement. My remonstrations to McGrath on the effectiveness of the progressive sexual education programmes in the Netherlands which produces a teenage pregnancy rate some seven times lower than Scotland’s and results in children starting sex later, was never likely to make much of an impact here. On every one of Scotland’s 32 council education committees, Catholic clerics and religious affiliates are entitled to take their seats without election. They wield a gruesome power. In 2008 a deal had to be struck between the Church and health and education officials. A vaccine against cervical cancer – caused by the human papilloma virus (HPV) passed on during sex – could be administered to schoolgirls providing there was no accompanying safer sex advice mentioning condoms offered protection against other sexually transmitted diseases. Not only that, the mention of condoms was dropped from leaflets going out to all Scottish schools, even non-denominational ones.

On the DVD Stenzel was selling, ‘Sex Still Has a Price Tag’, SIECUS warns it is based “on fear and shame; designed to control young people’s sexual behavior by instilling in them feelings of dread, guilt, and embarrassment.” The report argues that “in both her tone and her words, Stenzel appears to have an intense dislike or at least distrust of the young people she is speaking to, and seems to see her goal as that of a drill sergeant or prison guard who is there to keep them in line and dole out punishment. Stenzel relies on inaccurate statistics and passes off gross exaggerations and complete falsehoods as fact.” SIECUS concludes that her curriculum represents “the worst kind of abstinence-only-until-marriage programming.”

The ‘sex lady’ promised the children she would answer every email that was sent to her and would help them with any problem they had.

After her session, children were rewarded with soft drinks and snacks while photographs of pupils from different schools were taken posing with her. Questions were collected from them that would be carefully picked and read out in the second half. I didn’t stop for that. I went out to my car and banged my head on my steering wheel in despair.

Following my visit, the story was printed in the Daily Record which claimed one pupil who heard her was so upset he needed “extensive support”.